Ecological impacts of roads and railways extend into the surrounding landscape, leading to habitat degradation and reduced wildlife densities within an area larger than the actual road or railway corridor. As a consequence, natural values within large areas may be jeopardized due to transport infrastructure.

TRIEKOL has addressed the impacts of transport infrastructure on protected areas. In particular, it has been investigated to what extent this density reduction near transport infrastructures can be expected to compromise the habitat quality and conservation value of Swedish Natura 2000 areas designated for the protection of birds (Special Protection Areas; SPA). In addition it has been studied how conservation authorities currently address infrastructure impacts in management plans for SPAs.

Swedish Natura 2000 areas designated for the protection of birds.

The majority of Swedish SPAs are, to some extent, found within this one kilometer road/railway effect zone. The total overlap between SPA and effect zone is approximately 126,000 ha, or 4.2% of Swedens total SPA area.

There are, however, large differences amongst biogeographical regions. In the southern (continental) and coastal regions combined, 25.8% of the total SPA area fall within the effect zone, representing an estimated 4-7% reduction in bird abundance within SPAs. The proportion of overlap is higher for smaller SPAs and, accordingly, smaller sites can be assumed to experience a greater impact from transport infrastructure and traffic.

Implications for the management

The impacts from roads and railways in Natura 2000 sites are concerning as this network of protected areas is a cornerstone for maintenance and restoration of biodiversity within the EU.

Stronger emphasis in the management of Natura 2000 sites should be placed on the threats to wildlife conservation caused by transport infrastructure and traffic. Special attention should be paid to sites with a large overlap with the effect zone and sites hosting particularly vulnerable taxa or habitats.

Infrastructure owners and managers need to make their best efforts to minimise and compensate for the negative impacts of roads and railways and associated traffic in SPAs and other protected areas.

The subproject Infrastructure impacts on protected areas has resulted in one report in Swedish and one scientific article in Nature Conservation 36:1-16 (2019). 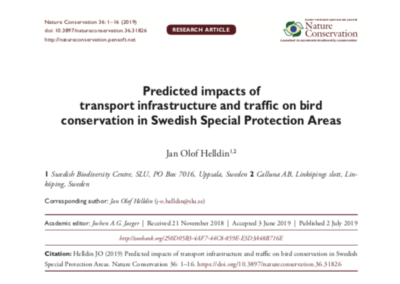 Infrastructure and traffic impacts on bird conservation in SPA