Page not available in Swedish.

Tunnels in combination with guiding fences are standard mitigation measures for roads near amphibian habitats. They are designed to lower the number of road-killed amphibians while still allowing them to pass the road.

However, the monitoring of such measures often fails to answer whether the two goals (lowered roadkill and barrier effect) are reached, and accordingly available design guidelines for amphibian tunnels and guiding fences stand on a weak foundation.

In the last years, the following three amphibian mitigation sites near Stockholm were monitored:

The monitoring derived valuable results regarding effectiveness of amphibian mitigation measures in reducing roadkill and barrier effects. We have now summarised and compared these results, and analysed what they imply for future mitigation, i.e. how they can help answering the questions “where” and “how”.

The reports (all in Swedish) of the three mitigation sites near Stockholm, Sweden can be found here:

The subproject Amphibian passages has resulted in a scientific article (published by PeerJ, 2019). The technical report for the monitoring in Skeppdalsström was also finalised within this subproject (see below). Links to all technical reports from the three sites can be found above. 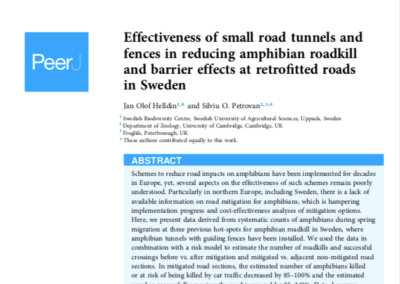