Both humans and wildlife are negatively affected by traffic noise. So far, this problem is dealt with mainly in the built environment. But also in natural environments technical noise is a serious disturbance factor.

The subproject Noise in natural areas studied how traffic noise effects in valuable natural habitats can be identified.

It is well known that road traffic noise affects both humans and wildlife adversely. Noise disturb, and leads to stress and ill health. So far, this problem is dealt with mainly in the built environment. But also in natural environments technical noise is a serious disturbance factor for humans, leading to reduced recreational values, and for many animals, with drastic effects such as increased mortality and reduced reproduction.

The existing guidelines for noise in recreational areas by the Swedish Transport Administration (STA) are rarely or never implemented.

One reason for this may be the lack of methodology to assess the problem. Noise impacts large parts of the landscape, and should therefore be considered a major environmental problem. The negative consequences of noise are likely the greatest in particularly valuable natural areas, and any mitigation should be primarily directed to those areas.

Also internationally, strategies for eliminating noise in natural environments are largely lacking, although the problem has been noted for several decades.

Studies conducted previously on the effects of traffic noise on biodiversity have identified the dose–effect relationship. In these studies, limit values for road traffic noise in valuable habitats have been proposed. Existing knowledge about the impact of traffic noise can be used to set up a strategy for effective action. New studies can strengthen the basis for such a strategy, and help directing measures to the most cost­­–efficient sites.

Technical noise cause disturbance in natural areas such as urban parks and nature reserves. Studies of noise impact on bird life and outdoor recreation point at similar limit values. The figures show how traffic noise can affect both numbers of breeding birds (B), and percentage of visitors in parks that are satisfied with the ”soundscape” (A).

Within TRIEKOL a method was developed for identifying, mapping and ranking conflict points for road traffic noise in valuable natural habitat along the existing road network. The method can also be used in early planning stages for new road and railroad projects (e.g. within a landscape analysis).

The resulting map has proven an effective tool for decision support in ongoing processes (e.g. planning for new construction or upgrading of infrastructure, deficit analyses of existing infrastructure) and for creating a basis for stakeholders dialogue. The method can also be used to monitor the effectiveness of implemented mitigation measures. The project has been a pilot study for a national mapping of conflict points.

The subproject Noise in natural areas is reported in two reports in Swedish and the method itself is also scientifically reported in Oecologia Australis (2013), see below. 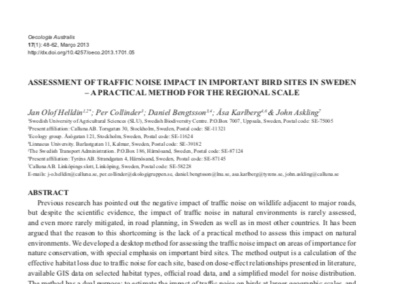 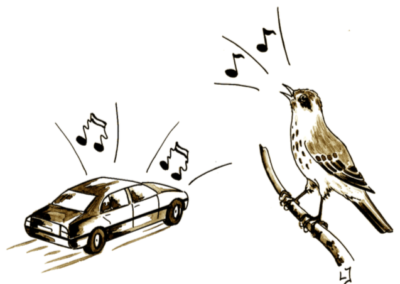 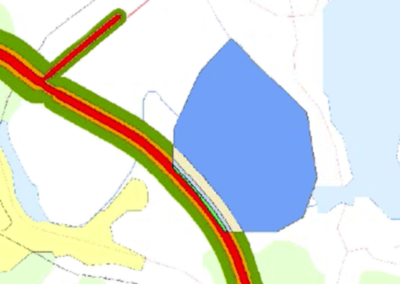